About Jacob Johansen
(The hottest broker on the Coast)

He’s not just a real estate agent – he’s also the hottest broker on social media. He is one of Mojo Estates’ two faces, but behind the slick facade hides an exciting man, who traveled, worked, and had success as a producer.

The big breakthrough came in the summer of 2003. At Ibiza’s leading nightclubs, the song “Stars” was played until the early morning. Behind the song was the duo Morjac with Jacob Johansen. After several years of hard work, the Danish producer had finally created the hit that sent him all the way to the top. . “Stars” took the leap onto the international charts that summer – and Jacob took the leap to the big stars. Beyonce, Lenny Kravitz and Sinead O’Conner became among his new collaborators. 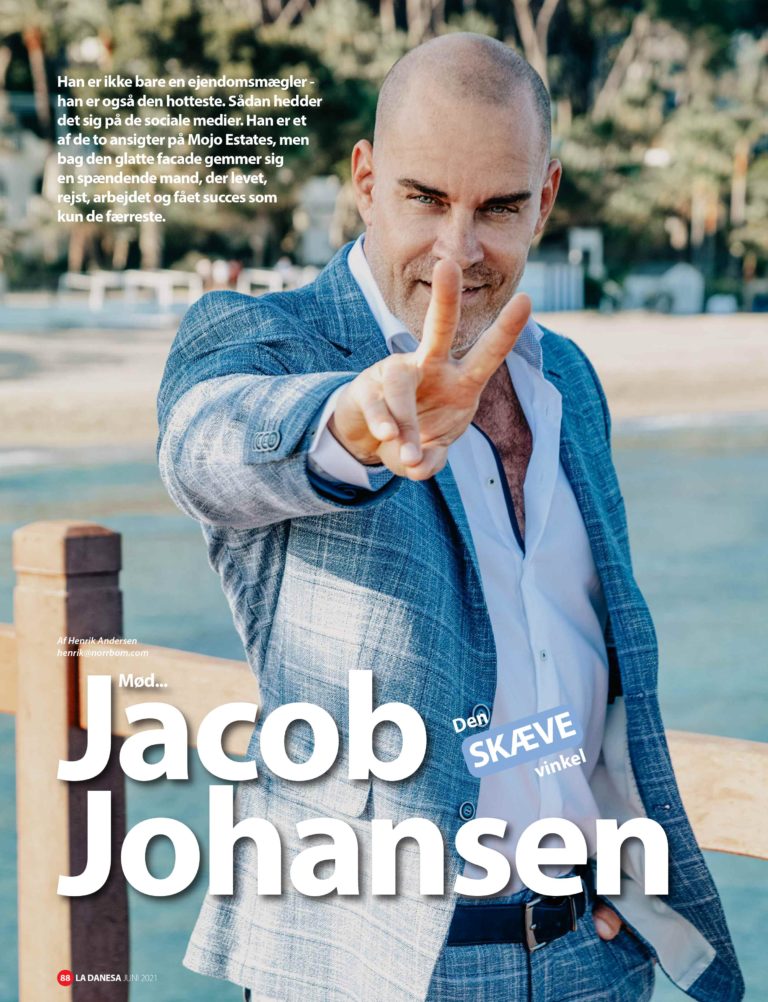 From Risskov to Manhatten
His career began in the bedroom in Risskov, where a young Jacob was strongly inspired by Kim Schumacher’s radio programs with all the new music from the USA. When the opportunity to attend Mellerup Musik Efterskole offered itself in ‘88, 16-year-old Jacob did not hesitate to strike. Here a new world opened up – both musically and emotionally. The latter we will return to later. First, we have to go through a decade where the young musician played across the world with small bands all over Denmark, and at the same time struggled to get studio time to produce his music. But one-day Kjeld Wennick opened his eyes to Jacob’s talent. Wennick was the man behind Ace of Base and record label Mega Records. He was looking for new talent. “He invested more in me than I could thank him for. Kjeld Wennick sent me to the big studios in LA and New York to record and mature as a producer, “says Jacob and continues:” It was precisely during these years that my international network in the music world was founded, and I made my first experiences with business acumen and brokerage in the publishing industry.”

The Danish producer fell for the genre club music around the turn of the millennium and worked closely with the world stars of the time Todd Terry and Bob Sinclair. “It was a great time. After the big breakthrough in ‘03, I traveled the world four times a year and attended all the music fairs in Miami, Cannes, Amsterdam, London, Berlin, and, of course, Ibiza. My base was New York, and we bought a nice apartment in Manhattan, ”says Jacob Johansen, who, despite a life in the overtaking lane, had also started a family. At the after-school center in Mellerup, he meets Ida on the first day of school. Together, they barely step out of their teenage years before she gets pregnant and the couple gets married. Today they have three grown children and the silver wedding is over. “My youth has undeniably been different from my circle of friends. From an early age, I have been forced to behave fairly responsibly. Today, I am sure it has helped to shape me and make me more focused, ”says Jacob. The focus was at least on the children’s schooling, as the Johansen family chooses to leave New York for a slightly less hectic everyday life and a few more hours of sunshine. 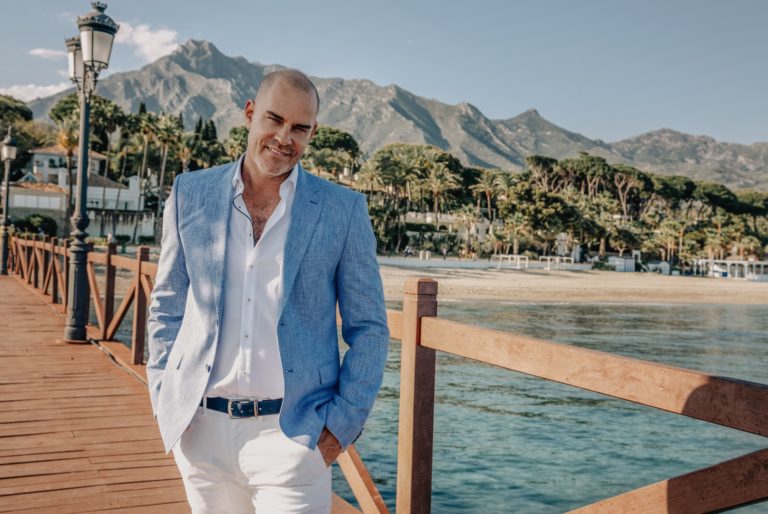 Find your Mojo
At first they wanted to move to Barcelona, ​​but the greatly improved air connections to Málaga made them come further south. “We wanted Spain and went all in. The kids started in a Spanish school, we became residents and we bought a nice villa. – Or rather; the villa was lovely after we had renovated it, ”says Jacob Johansen, who in previous years had sniffed a bit for the housing market by investing in real estate. “I have never been very interested in money. On the other hand, I have it for properties and renovation. Time has shown that I also have an eye for it, ”says Jacob, who wanted to further professionalize the housing agency after his own experiences with buying real estate in Spain.

At his children’s school, he meets the businessman Per Mønsted, who had the same thoughts. In 2017, Mojo Estates was created. “Mojo is the epitome of quality of life – a state you are in when you are in your best self. This is where we must strive to be and maintain ourselves, ”explains the Danish real estate agent and continues:“ When you buy a home on the Costa del Sol, it is precisely to gain quality of life and find your Mojo. That’s why we like the name. ” And customers seem to like Mojo Estates, which today employs exactly ten happy-go-lucky employees. “The Danes are courting Spain more than ever, and we advise and sell well to investment-minded companies. It is an exciting time we live in, ”says Jacob Johansen, who is not afraid to come up with a few tips for sun-hungry Scandinavians. “You should not wait too long. We feel a huge desire to invest. The same goes for the desire to live and travel after a sad time with Corona. So prices will soon rise significantly, but you can still find a good deal – especially in Benalmádena, which has many exciting projects on the way, “concludes Jacob. A good and warm summer is on the way – also for the coast’s hottest broker.

Tell something that (almost) no one knows about you.
I have a past in music and reached far in the big world. As a producer and manager, in the early 00’s I worked with the biggest of the biggest stars. But in Denmark I was a relatively undescribed magazine.

Your worst habit?
I check messages on my mobile when I have to pee at night 🙂

Your best and worst trade?
My best deal was the first home I bought here in Spain. It was in the middle of the financial crisis a little over ten years ago. Well, my wife and I invested a lot in renovations, but that was not speculation. Still, I got to sell our home a few years ago for four times the price. My worst trade during the same period was to take out a mortgage in Schweitzer franc.

What makes you nervous?
Men in white trousers collecting golf clubs and red wine. On the more serious side, it is racism. People who preach about how others should arrange themselves – people without empathy who do not listen.

Do you have a good ritual?
I manifest daily in my quiet mind and I try to exercise every morning and drink plenty of water before the day starts.

The most boring job you’ve ever had?
My work has never bored me – on the contrary, it has always been my passion. I have always been independent, cherished my time, what I spend it on and with whom. Not all work in an organization is just fun, and sometimes you have to hold on, even though it may seem boring.

If you were not a real estate agent, what job would you have?
Then I would work as a kind of ambassador for the Costa del Sol – maybe as a blogger. The area is bursting with life, opportunities and exciting people who never get any publicity. The impression of the Costa del Sol remains completely wrong in several places. We need an image change.

Who would you like to drink a beer with?
Of mortals within reach, I would like to have a serious word with the Mayor of Benalmádena. The municipality is full of opportunities but needs a boost from the municipality. Of legends, I would like to chat with the musician Dr Dre. I met him and Snoop in LA years ago, but at the time had too much awe. If I have to dig one up from the dead, it could be John Lennon.

Do you believe in God?
Both yes and no. I think religion is exciting and it’s nice to think about Santa and that sort of thing. But much of the written hocus pocus makes it hard to maintain faith – especially when things are going well and we are all doing well.

Do you have a secret talent?
No – my talents are no longer secret. I’m exhausted for surprises. Over the years, I have become good at motivating people around me, spreading the Mojo concept and inspiring others.