The most southern ski resort in Europe! | Sierra Nevada

Mojo Estates: First movers on the housing market AND on the slopes

One of the most unique things about the Costa del Sol is that you can lie on the beach in the morning and ski in the afternoon, or you can surf the waves in the morning and visit the Hot Springs in the evening. In his quest to be the first person to Ski this season, Jacob threw himself into action. Read here about the action-packed trip to the top of the Sierra Nevada and the freshly fallen, crisp snow. 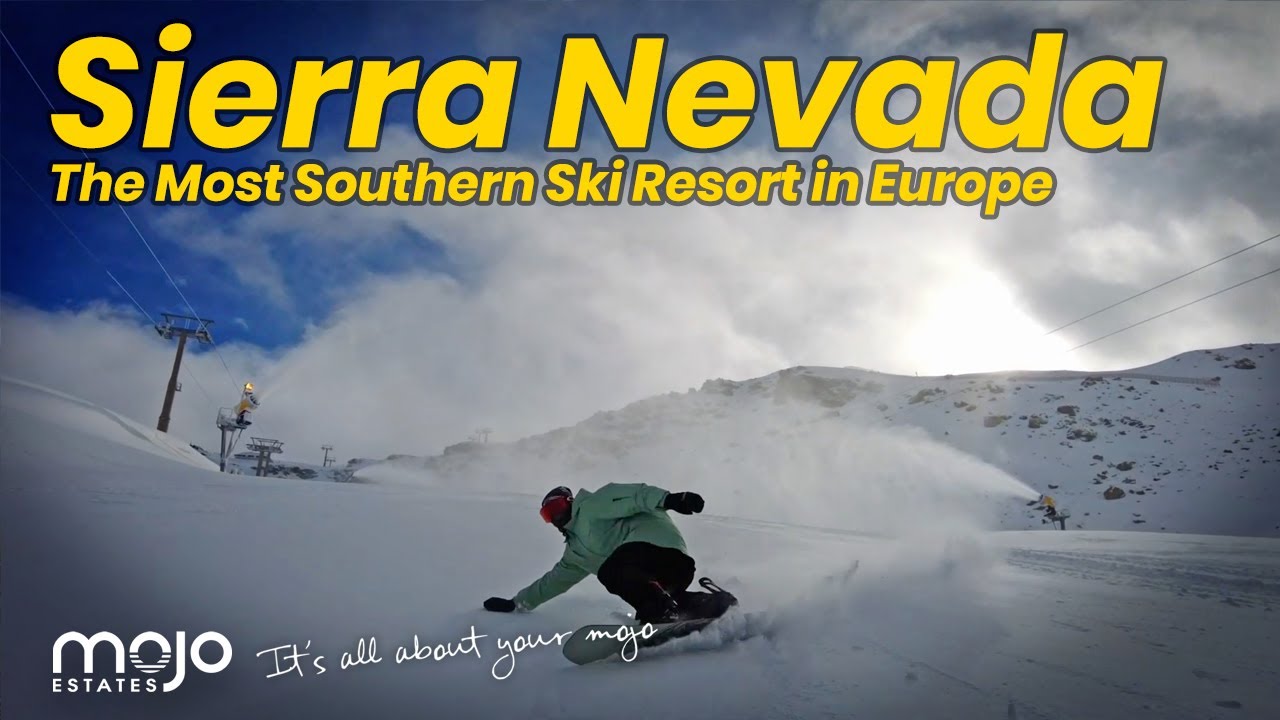 Playa de Maro in Nerja – Pit stop before the slopes

When you want to be first to the top of the mountain, you also have to get up early, so at. 07 in the morning Jacob set out from Mijas. As usual, he has to make the most of everything so he stops by Playa de Maro in Nerja on the way to Sierra Nevada – a beach that lies under the rocks in Nerja. It is one of Nerja’s most beautiful beaches, and it is especially known for being a great place to snorkel. After a fun ride with the surfboard in the rippling waves of the Mediterranean, the trip is resumed towards Granada and up to the snow-white slopes of the Sierra Nevada.

Facts about the Sierra Nevada

Sierra Nevada, Spain's largest ski resort. It is the (in winter) white-clad mountain peak that can be seen from most of the province of Málaga. It takes a good two hours to drive to the ski resort, which is located at 2500 meters altitude in the province of Granada.

First to the top of Sierra Nevada
When you insist on being the first, then you must also be determined. At this time, the lifts were not in operation yet, so he went on foot up the hill a long and tough haul. But on top of that, it was all worth it. Newly fallen virgin snow, completely still. Only a group of Spanish snowboarders had also ventured up the hill for the first time this year to experience the breathtaking views Sierra Nevada has to offer. Together they took the trip down back to the village.

After such a long walk in the snow with ski boots, one needs a rest. Jacob had settled in the old town of Granada just opposite the cathedral. Just as apartments in the historic part of Málaga have gigantic rental potential, Granada is also a popular destination for tourists, as much in winter than in summer, due to the opportunity to ski in Sierra Nevada and shop in the city center. If you like shopping, you should make your way past the giant and newly opened shopping center Nevada Shopping, which has a large selection of different international brands.

To end the trip properly, Jacob passed the hot spring in (aguas termales) in Santa Fe with all intentions of a trip in the naturally heated water. Unfortunately, due to the global situation, it was not allowed to jump in, which a couple of guards made clear. Hot dip or not, then this what Mojo Estates stands for, and with this trip, Jacob has marked that the stunning Andalusian scenery is enormously diverse and freely accessible (almost then). If you want to experience a relaxing experience in warm pools with a luxurious atmosphere, you can book a spa trip in Hammam al Ándalus in the center of Málaga – a place that is very well known by the two Mojos.

Early bird gets the worm
If there is one thing that characterizes Mojo Estates, it is that they are first movers. Mojo was the first to develop a new process for buying property on the Costa del Sol, which is characterized by an efficient and not least fair buying process, where the buyer does not have to spend more time or more money than necessary.

Since then, Mojo Estates has become an expert in finding properties on the Costa del Sol with a perfect location and great views at a fair price and has established a strong buyer base that is ready to strike. It is seen in the numerous distance sales that were closed over the summer. Mojo Estates is no nonsense, and it is also something that characterizes their buyers. So of course Mojo was first on top of the season’s snow-capped mountain peaks.

How to Buy Ski Lift for the Sierra Nevada

If you are like Jacob, then you will go up and down. No need to wait in long ticket queues – we have to go straight to the slopes. The easiest way to get out of the queue is to simply buy your ski pass online on the Sierra Nevada website. You can also save a little if you buy your Sierra Nevada ski passes online before you leave. But the biggest saving is probably that you avoid the queues and can go directly to the print-yourself machines and get your ski pass issued there. It costs a good 50 EUR for a day pass for an adult.